Depart from me, you cursed, into the eternal fire prepared for the devil and his angels 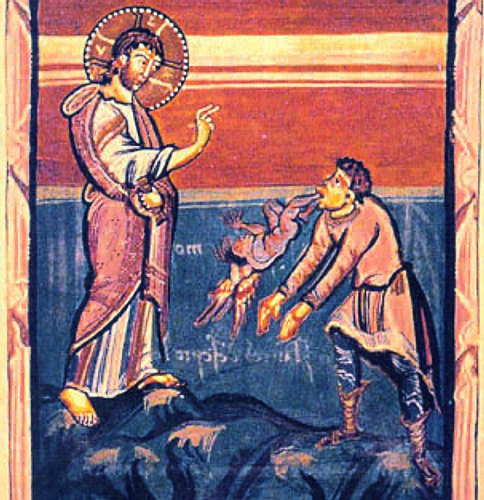 The Abyss has no Bottom

The chambers of the dammed are so great that no human beings know the depth, width, and scope of the dungeons of hell. For many centuries, God has shown a vision of hell to his saints on earth. From St. John Bosco, and St. Catherine of Siena to our first Pope Peter. Monks, Nuns, and even sinners who were spared the eternal fire had the most awful visions of hell. I will share with you one vision that was shown by St. Peter our first Pope.

Quote- Again, I saw men and women with blackened countenance in a pit of fire, and I sighed and wept and asked, “Who are these, Sir?”  He said to me, “These are men who visited prostitutes and adulterers who, having wives of their own, committed adultery; and also the women of the same kind, who committed adultery, having their own husbands, So they pay the penalty without ceasing.”[1]

I saw there as well girls clad in black raiment, and four fearsome angels holding in their hands red-hot chains, which they put around the girls’ neck to lead them away into darkness.

Again I wept and asked the angel, “who are these, Sir?” And he said to me, “These were virgins who defiled their virginity, without their parents knowing it. So now they pay the due penalty without ceasing.  Next I beheld there men and women naked and with their hands and feet cut off, in a place of ice and snow, with worms devouring them. When I saw it, I wept and asked, “Who are these, Sir?” He replied, “These are the ones who injured the fatherless and widows and the poor, and did not trust not in the Lord. So they pay the due penalty without ceasing.”

Then I looked and saw others hanging over a channel of water. Their tongues were extremely dry, many fruits were set out before their eyes. But they were not allowed to eat them. I asked, “Who are these, Sir?” He replied, “These are the are who broke the fast before the time appointed, so without ceasing they pay this penalty”

This vision that was shown to St. Peter clearly illustrates the type of punishment that each soul faces.  We are all accountable for our actions, words, thoughts, and deeds. Me, you, the unbeliever, the heathen, etc. No one can escape the just judgment of God!

“But if our wickedness serves to show the justice of God, what shall we say? That God is unjust to inflict wrath on us? (I speak in a human way.)  By no means! For then how could God judge the world?  But if through my falsehood God’s truthfulness abounds to his glory, why am I still being condemned as a sinner?  And why not do evil that good may come?—as some people slanderously charge us with saying. Their condemnation is just.”[2]

We try to reason and think we know better than God. This is prideful thinking. How can we understand the judgment of God? How he determines who goes to heaven, hell, or purgatory? Saint Thomas Aquinas address this question in his Summa Theologica Question 88, article one about the judgment of God

“It is written (Matthew 12:41): “The men of Nineve shall rise in judgment with this generation, and shall condemn it.” Therefore there will be a judgment after the resurrection.

I answer that, Just as operation refers to the beginning wherefrom things receive their being, so judgment belongs to the term, wherein they are brought to their end. Now we distinguish a twofold operation in God. One is that whereby He first gave things their being, by fashioning their nature and by establishing the distinctions which contribute to the perfection thereof: from this work God is stated to have rested (Genesis 2:2). His other operation is that whereby He works in governing creatures; and of this it is written (John 5:17): “My Father worketh until now; and I work.” Hence we distinguish in Him a twofold judgment, but in the reverse order. One corresponds to the work of governance which cannot be without judgment: and by this judgment each one is judged individually according to his works, not only as adapted to himself, but also as adapted to the government of the universe. Hence one man’s reward is delayed for the good of others (Hebrews 11:13-40), and the punishment of one conduces to the profit of another. Consequently it is necessary that there should be another, and that a general judgment corresponding on the other hand with the first formation of things in being, in order that, to wit, just as then all things proceeded immediately from God, so at length the world will receive its ultimate complement, by each one receiving finally his own personal due. Hence at this judgment the Divine justice will be made manifest in all things, whereas now it remains hidden, for as much as at times some persons are dealt with for the profit of others, otherwise than their manifest works would seem to require. For this same reason there will then be a general separation of the good from the wicked, because there will be no further motive for the good to profit by the wicked, or the wicked by the good: for the sake of which profit the good are meanwhile mingled with the wicked, so long as this state of life is governed by Divine providence.”[3]

When we commit a sin against God, it is a “charge” against us on the scales of Judgement. The demons have a “legal right” over the soul because we consciously or unconsciously choose to do evil, to serve the evil prince of this world.  Confession is used to bring your sins before Almighty God. The Absolution that comes at the end of the confession, breaks the legal hold of demons over your life. Let us pray for the mercy of God to break the chains of sins in our lives!

Lord, have Mercy. God, Our Lord, King of Ages, All powerful and Almighty, You Who made everything and who transformed everything simply by Your Will. You Who in Babylon changed into dew the flames of the “seven-times hotter” furnace and protected and saved the three holy children. You are the doctor and the physician of our souls. You are the salvation of those who turn to You. We beseech You to make powerless, banish, and drive out every diabolic power, presence, and machination; every evil influence, malefice, or evil eye and all evil actions aimed against Your servant… [persons]… and in this place …..[places]… where there is envy and malice, give us an abundance of goodness, endurance, victory and charity. O Lord, You who love us, we beg You to reach out Your powerful hands and Your most high and mighty arms and come to our aid. Help us, who are made in your image; send the Angel of Peace over us, to protect us body and soul. May God keep at bay and vanquish every evil power, every poison or malice invoked against us by corrupt and envious people. Then, under the protection of Your authority may we sing in gratitude, “The Lord is my salvation; whom should I fear? I will not fear evil because Thou art with me, my God, my strength, my powerful Lord, Lord of Peace, Father of all Ages.”[4]

God Bless you all,